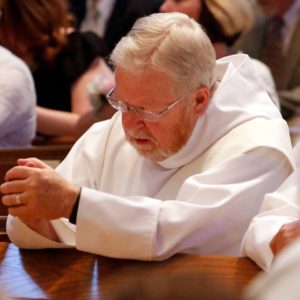 The very first Broadway play I ever saw was an excellent musical starring Anthony Newley and Anna Quale. The name was “Stop the World I Want to Get Off.”

The show, set against a circus backdrop, focuses on Littlechap, the main character, from the moment of his birth until his death. Each time something unsatisfactory happens, he calls out ‘Stop the world I want to get off!”

The title can pretty much explain the feeling that many of us have had, at least, since the beginning of 2020. I took a look back to see some of the events that have happened from the beginning of the year through April 9th. We, and the world, are devastated by the Coronavirus… wild fires consumed large parts of Australia… the economy is rocked, millions of people out of work… our churches were closed and we were cut off from the sacraments… and people are generally fed up, tempers are flaring and we see the world through very different lens.

I could go on and on but you all know how this year has unfolded. It has been, and continues to be, a very difficult, sometimes surreal time for our country and the world. Perhaps some of you may be wondering why I used April 9th as a cutoff date. There are two reasons actually. First it marks the first 100 days of 2020… a good check point to see how it’s going and the second reason is that the date marks the 155th anniversary of the ending of our Civil War. Interesting word, that word, “civil.” Using a slightly different definition, with so much tension and division in our country one could say we are again engaged in a Civil War only this time it would be more appropriate to call it an “Uncivil War!”

There is no place for this behavior in our Gospel… in the message of Christ. We need to start, once again, hearing what Jesus has taught us and acting the way we, Christians, are expected to act. It’s not a big thing… it’s just how God expects us to act. We say we are followers of Christ… let’s resolve today, now, to do a better job and act like we are.